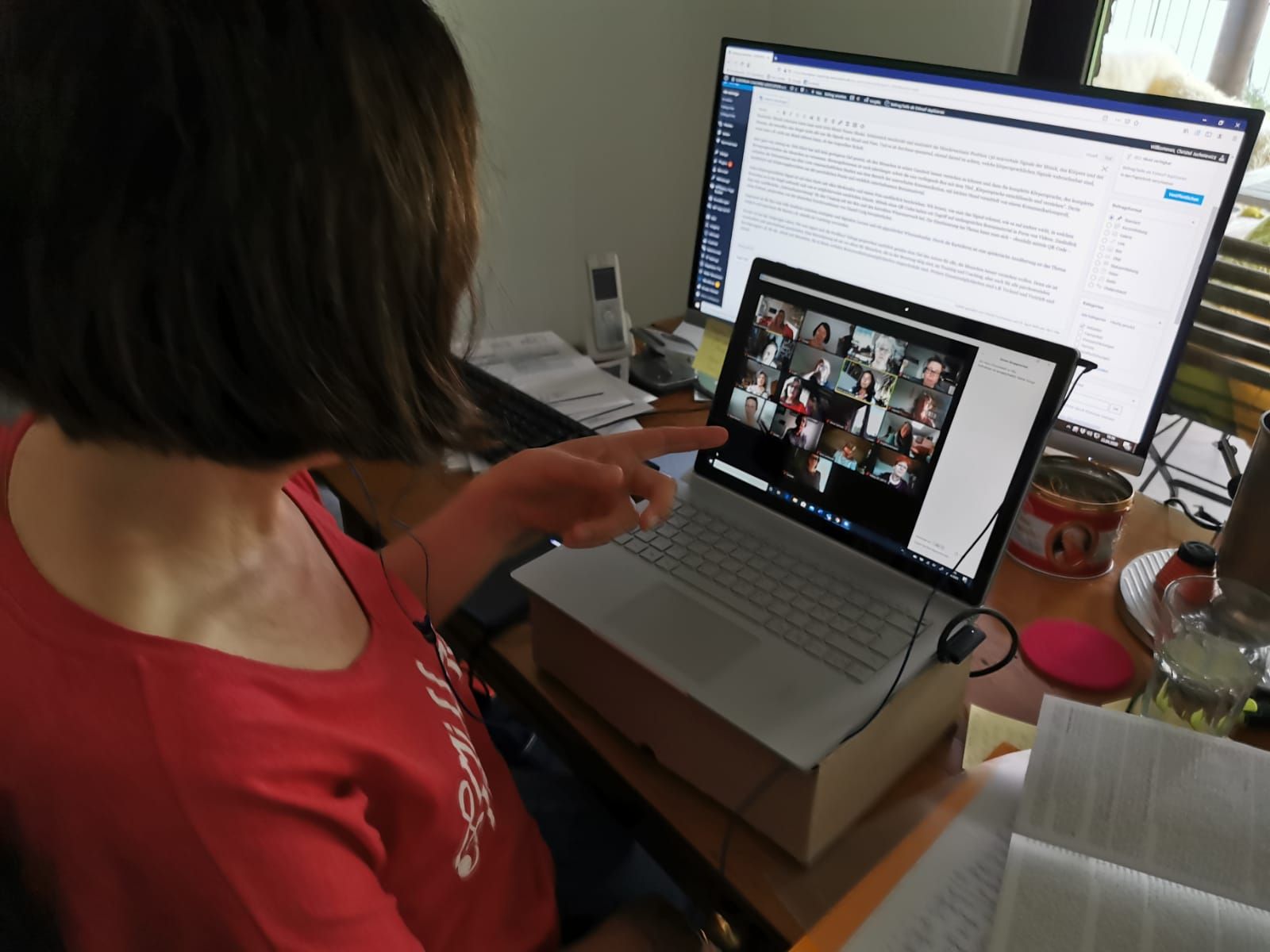 What does a choir do that is not allowed to sing together. A workshop report from MissHarmony - Barbershop-Choir from Erkrath

The corona virus has gradually infested our everyday life, and so the letter from the landlord of our rehearsal room on March 12 came as no surprise. Samples were suspended until April 19 - we had already feared something like this, an alternative accommodation was already planned. But three days later the world suddenly looked completely different, we were advised to avoid social contacts in general and even before the lockdown it was clear to us that choir rehearsals in the face of a highly contagious virus are no longer a good idea.
We took it sportive and thought, well, we could manage without choir rehearsals until Easter. But all of a sudden, more bad news followed, for example the cancellation of the BinG! barbershop festival in April and later the cancellation of the BinG! Harmony College in September. BUT: The barbershop virus is at least as persistent as Corona, and our rigor mortis only lasted for a short time. Most of us found ourselves in front of our home computers the very next day of rehearsals, because a week without choir practice is simply not a complete week.
Choir rehearsal via zoom chat was so exotic at the end of March 2020 that even the local press came to one of our singers for reporting, of course with a safe distance. We had a lot of fun trying out and testing what is virtually possible at all, and the joy of seeing each other again outweighed the frustration when we realized that there are a lot of things that can be done online, but not singing synchronously. The local press then graciously refrained from reporting on the first rehearsal, which would probably have ruined our image, but already the following Thursday 15 singers were sitting in front of their computers again and had concrete ideas how this virtual rehearsal room could be used. It was a complete success and this time the newspaper reported.
The day after the release the phone did not stop ringing. Choirs from the whole local distribution area of the newspaper (Duesseldorf and Wuppertal) called and wanted to know how we do "that" with the virtual rehearsals. We really enjoyed our short-term fame as "technical experts" (thanks to the media). Especially nice was the consulting of the male choirs. When co-chorus director Petra tried to explain the problem of latency in the virtual rehearsals, they just waved aside and said that "their specialists in the choir would get that under control". Obviously, getting advice from a women's choir doesn't fit into every world view.
Soon the 9th choir rehearsal will take place via zoom and routine has become routine. We no longer use the free zoom access (which has time restrictions), but a professional access. In addition to our Thursday rehearsal, zoom single voice rehearsals are held on other days and the channels are well used by more than 2/3 of the singers.
The rehearsal contents are also adapted to the possibilities. Instead of polishing the harmony, we learn new pieces or take out old repertoire pieces and read them anew. As barbershop singers we have the luxury of being able to learn mostly with teachtapes anyway, and in the virtual rehearsals the little sloppiness and hearing errors in the individual voice ranges are at least revealed quite well. It takes a little bit of courage to sing in the virtual rehearsals while the others sing along with their voices when the microphone is switched off.
But then there is also the social aspect... it is very stressful not being able to meet in person the whole time. There was one exception at the end of April, when a quartet gathered for a birthday serenade in a singer's garden, with a huge distance between them. The MissHarmony-WhatsApp-Group glows with creativity, according to the motto: if singing together doesn't work, then we'll just do something else together.
Our balance: the flexible structure of our choir benefits us. We like to move forward, but we are not a performance choir and therefore we did not have to cope with a fall height like other choirs. We are also "self-sufficient" and used to rehearse independently of choir director instructions. We were therefore able to approach the online rehearsals in an unbiased and optimistic manner.
Here are our (subjective) tips for choirs:

Why are we writing all this down? Because (hopefully) in 12 months we don't believe that all this really happened anymore. We would like to read this next year and we wish that it will feel like an evil spook from the past. As it looks at the moment, however, we choristers will be among the last to be allowed to return to normality, because the danger of infection is particularly high among us. And therefore: We would be happy if many other choirs would follow our example and make the best of the situation.

There may be people who enjoy saving lives just by staying at home. Without belittling this important contribution: We barbershoppers lack the gigs and the rehearsals together!

Are you considering rehearsing virtually? Then these hints (in German, with references to further German and English sources) from the VAN magazine (from which the picture was also taken) might help you: https://van.atavist.com/verbindung

May you do well!

Regarding the proposal of the Barbershop Harmony Society (BHS) to hold mixed international quartet and chorus competitions from 2021, we would like to make the following first statement:

Every year, the BinG! Harmony College requires a great deal of organization, loads of time and lots of know-how. Fortunately, we've always been able to find dedicated, diligent helpers, who provide for a structured concept, detailed preparation, and keep everything running smoothly. Most of this happens in the background.

This summer all young singers between the ages of 16 and 25 can look forward to a special treat: BinG! is hosting the A CAPPELLA YOUTH CAMP for the first time!