This initial question preoccupied not only the German barbershop association BinG! but virtually all singing groups, regardless of their size and style, after the pandemic turned our hobby into a "hazardous" activity. Many initiatives were subsequently revived or restarted around the globe with the aim of bridging the necessary physical distance. In our project, however, we were not concerned with approaches to reduce the risk of infection through greater physical distance - singing with great spacing outdoors or in empty parking decks, singing in cars, and the like - but with singers completely separated spatially who nevertheless sing at the same time. Very quickly it became clear that common video conferencing systems do not allow this because the runtime of the data over the Internet does not allow true simultaneity. However, there were and are several software products that minimize this so-called latency to such an extent that simultaneously sung chords are actually possible.

In an initial project phase, we compared various products with one another in terms of the minimum latency actually achievable in a test group, ease of use during installation, configuration and application. In the - undoubtedly subjective - evaluation of the project team, the Jamulus product proved to be significantly superior. For installation and configuration alone, Jamulus achieved scores of 8.3 and 7.9 on a scale of 0 to 10, compared to scores of 5 and below for SoundJack and JamKazam. JackTrip proved to be so "wonky" to install that further testing was refrained from. In terms of measurement, the products hardly differed, all achieved latency values of 38-44 ms on average, which apparently depend more on the connection conditions of the participants than on the product. In the four tests performed in each case - clapping, singing to a metronome, singing a ballad and an uptune - Jamulus ranked so clearly at the top that the decision was exceptionally easy. Other aspects that would have swayed even a smaller lead of Jamulus over the other products in its favor include

In the further course of the project, the Jamulus version for USB sticks was streamlined to such an extent and thus tailored to less tech-savvy users that it can now be used as a common alternative when the audio configuration leads to problems, especially on Windows-based systems. Therefore, the basic idea of the product - automation where possible, customizability where necessary - is continued in this respect as well.

Based on the basic decision in favor of Jamulus, load tests were to determine possible performance limits of the product. When the test was planned, group sizes of 30 to at most 60 had already been documented in practical operation, and technical tests had been carried out with up to 150 simulated clients. The target sizes for our tests were then set at 25, 50 and 100. The test setup and execution were verified in a preliminary test (stage 0).

In each case, the system configuration of the participants was documented and their evaluation of installation, configuration, sound quality and overall impression was queried. With just under 150 of 175 possible responses, the information can be considered sufficiently representative.

Although a significant portion of the participants had only limited experience with Jamulus during the tests, the installation and configuration ratings of 8.0 and 7.5, respectively, were only slightly weaker than the pre-selection in Phase 1.

Overall, latencies were at a slightly higher level than in Phase 1, indicating a wider spread of connection conditions. It is noticeable, however, that the value on a managed platform increased noticeably with the number of subscribers, while it was largely independent of this on the self-configured server. 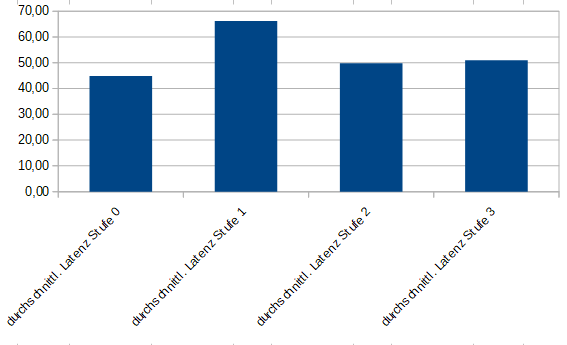 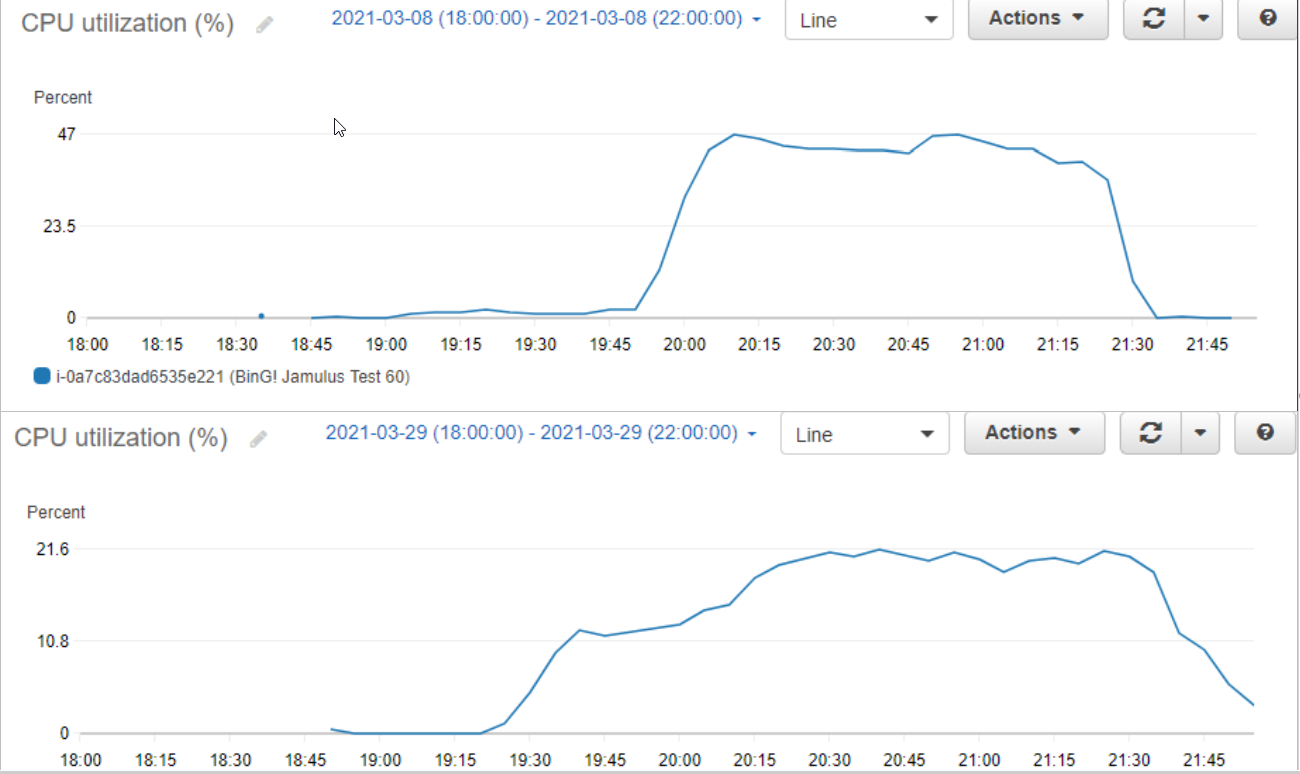 On the server side, the load in stage 2 (50-voice test) always remained below 50%, and in stage 3 (100-voice test) even below 25%, which is certainly also due to the generous server dimensioning. At the top of the picture, the layout in stage 2, below in stage 3. By parallelizing the sound checks - checking and, if necessary, adjusting the settings of the individual singers - in several sub-rooms, the slower increase in the load curve can be explained. Especially from an organizational point of view, this way has proven to be successful when many new "Jamulists" come together in one session. Since the set values are retained, the sound check in a subsequent session will be significantly simplified and accelerated.

However, the crucial questions still remain: How do the participants rate the sound quality that the server delivers back to their headphones, and how do they rate singing together overall? 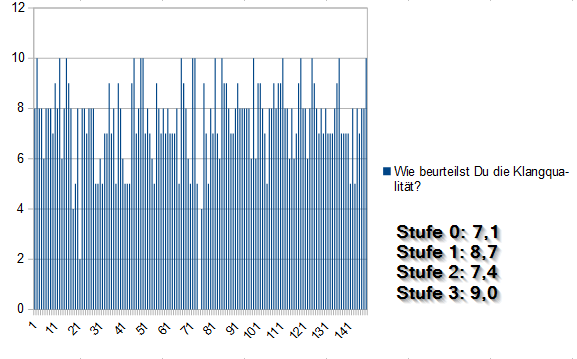 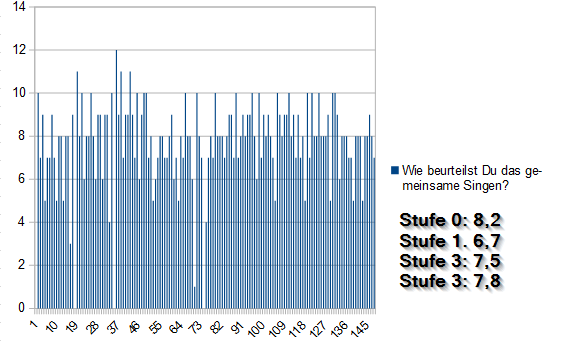 The outstanding evaluation of the sound quality also explains the statements of some test participants, according to which singing this way even has advantages over a rehersal in presence. This assessment is likely to be particularly influenced by the delay panning used in the last test stage, which - by calculating the time differences of the sound in a fictitious room - conveys a significantly clearer sound impression that considerably improves the identification and localization of individual singers.

Measured against this, the overall impression is rated a little weaker. The main reason for this probably being that the singing of untrained participants slows down noticeably in the course of a piece: waiting for the heard tone in order to sing simultaneously to it tends to cause an accumulation of the latencies of the individual singers. However, it has already been shown that this effect can be significantly reduced with practice. Nevertheless, singing chord progressions as instructed by a conductor, such as tags, and choosing slow pieces at a steady tempo is strongly recommended for starters.

At any rate, with such a thoughtful approach, the question of this article can be answered with a "yes" in good conscience.

It is of particular interest to the BinG! ensembles in this context that the Board provides a "BinG! rehearsal house" with four smaller and three larger Jamulus rehearsal rooms that can be reserved here. The rooms are named after rehearsal opportunities at the Oberwesel Youth Hostel as a reminder of our Harmony Colleges. In addition, interested choirs will receive one main room and four side rooms at their respective rehearsal times, all funded for six months by BinG! 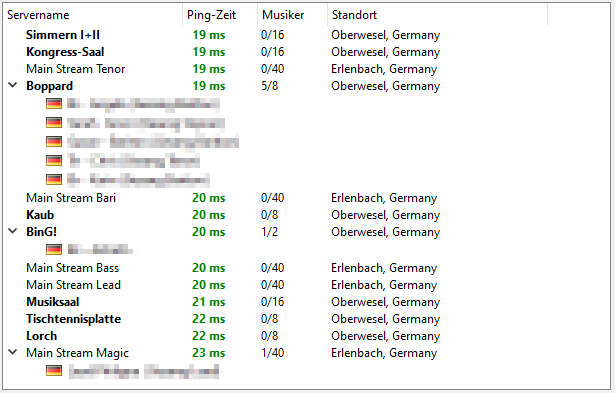